A quest is a task given to a player character that tells the lore of MilMo and yields a reward when completed. Most quests are given by by an NPC (non-player character) or from completing a previous quest (chain quest). Until you reach the maximum level, a quest will also reward you with Experience Points (XP).

There are currently 659 quests in MilMo.

Quests can range from talking to a certain NPC, unearthing a hidden treasure, or defeating monsters.

Most standard quest tasks take one of the following forms with a variety of quest objectives:

You can identify quest giving NPCs and World Objects from indicators over their heads:

icon or press L to open your Quest Log and see which Quests you have active. You can make an active Quest display its name and goals below the browser by clicking the Make Active button. 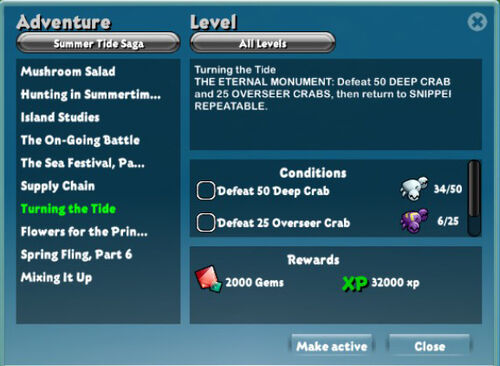 Currently Quests can not be abandoned.

Most rewards take the form of items, gems or coins, but some quests (especially classes-specific ones) give Abilities. Some of the more desirable reward items include Converters. All quests tend to include XP as part of the reward. Completing quests also ensures the receiving of Medals, see Medals/Questing and Medals/Summer Tide Saga - Miscellaneous for more information.

The following categories pages lists all quests in MilMo, separated by categories.