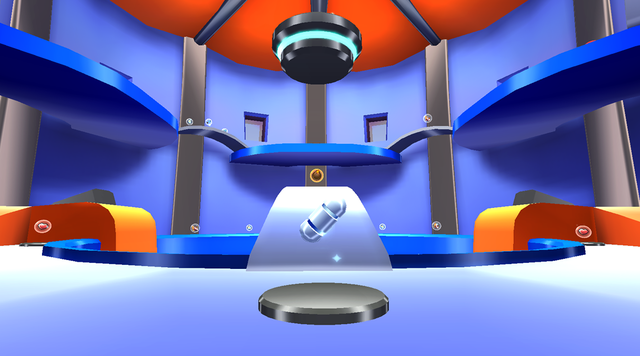 Deathmatch
Arena
Defeat as many players as you can. The player that has defeated the most enemies win!

The Deathmatch is one of the game modes available in the Arena.

Each deathmatch lasts 10 minutes. The winner of each match is the player who has defeated the highest number of players. The top 10 players are assigned "ranking points". The first place receives 10 ranking points, the second place receives 9 and so on. These points will later determine your ranking in the PvP Ladder, which can be seen in the Town screen. 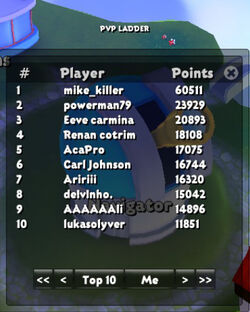 The goal of the deathmatch is to defeat the other players using melee, ranged weapons, bombs or even gravity. Note that everyone starts out with zero player level and the same two tactical assets; their legs and a rusty short sword. There is no persistent skills, equipment or stats.

Weapons are obtained by smashing the white hovering capsules and picking up the blue weapon bubbles contained within. There are five weapon types: sword, axe, club, bow and gun. You may only carry one weapon per class at a time (that's max 5 weapons), but each of your weapons can be upgraded twice (that's a max weapon level of 3). Whenever you grab a weapon powerup of a type you don't have, you're awarded a new level 1 weapon. If you already have a weapon of that particular type, the weapon gets upgraded - for a maximum weapon level of 3.

There are three types of pickup besides weapons.

First, think of each of your "lives" as being divided into three phases:

As soon as you spawn, get moving or you will die instantly. Find a speed powerup, get away from any ongoing fighting and get to the upper floor. Think of the basic Deathmatch map like this: the top floors are for preparation, the ground level is for fighting and the basement is for risking a horrible death.

Avoid getting into a fight without a level 3 weapon! Go find some weapon capsules as soon as you can. Your goal in this phase is to remain undetected or atleast un-engaged until you are big and bad. Stay away from all other fighters until this is the case. The ancient chinese general Sun Tzu (author of "The Art of War") famously noted that a general should never go to battle unless he was 100% certain of winning. This principle is very useful in the MilMo Deathmatch.

Once you have collected one or more level 3 weapons of choice, a speed boost and preferably a health boost of either kind, you're ready to go fighting (you may also want to pack a bomb and plenty of ammo).

Every melee attack slows you down by about 50%, so using a speed powerup or ability will give you a big upper hand. Never chase a bowman or gunman with a melee weapon unless you have a speed boost. They will outrun you and turn you into either a pin cushion or a fried chicken. 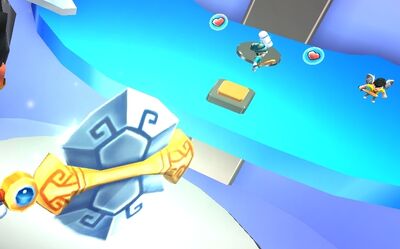 Stalk other players from above.

Bows and guns take skill and will take plenty of practice getting used to. However, in the right hands even a level 1 bow can prove an extremely deadly weapon.

The level 3 gun is the second deadliest weapon in the game. It's the one weapon that gives you a very clear advantage over other fighters with level 3 melee weapons.

The bomb is without doubt the most powerful weapon in the game. Save it for groups of fighters. Run through them using a speed boost and drop the bomb in their midst without stopping. Often they will be too busy fighting each other to notice the bomb before it goes off. Keep in mind that bombs hover! They cannot be tossed over edges onto fighters below (this is sometimes counter-intuitive but it can be used really creatively too) ...

Avoid picking up more than one fleet footed (red shoe) speed powerup at the same time! Otherwise you will simply become too fast, and will face a huge risk of missing a jump and falling to your death.

Speed abilities, however, can be good to save for later. You never know when the need arises to chase somebody down, or to run away from a pesky level 3 axeman.

Using your ears will save your life many times over. Listen for launch pads and jump pads: is someone following you? the amount of time between your own launch pad sound and theirs will tell you how close they are.

MilMo has an control scheme "MMORPG" which allows for zooming the camera in and out using the mouse scroll wheel. As soon as you spawn for the first time, zoom out so you get a better overview of your surroundings. This will alert you to stalkers and ambushes, and will save you a few lives.

Whether you dress using free or premium clothes, a good idea is to look as scary or cool as possible. I have noticed how many people will play less offensively against someone who looks cool or dangerous. This is silly, of course, since everyone has the same stats and the guy in the demon-armor could be a complete noob. It's just the way people are wired. 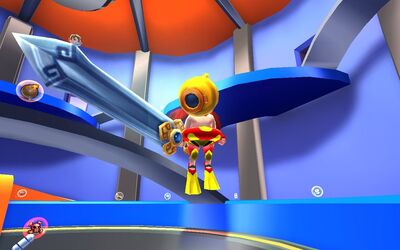 What, you mean I don't look intimidating?!
Retrieved from "https://milmo.gamepedia.com/Deathmatch?oldid=28150"
Categories: